Illustrations of current approaches and basic methods in archaeological research regarding past environmental change, human-environment relationship and interaction – and the important role of such data for current climate and climate change research. For a poster exhibition of the German Archaeological Institute’s “Groundcheck” research programme.

Locating the archaeological site of Göbekli Tepe within Turkey. 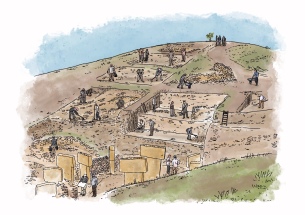 Overview of the busy excavations at early Neolithic Göbekli Tepe (Turkey); view into the so-called main excavation area towards west.

Visual notes: Foxes depicted at early Neolithic Göbekli Tepe are shown in a very specific posture: They seem to be leaping – as foxes typically do when hunting.

Visual notes: Otherwise very naturalistic crane depictions from early Neolithic Göbekli Tepe show an unusual leg anatomy – could they hint at some kind of ‘crane masquerade’ in the frame of rituals?

Visual notes: Among the many animals depicted at early Neolithic Göbekli Tepe, aurochs take up a special role – as full representations as well reduced to the symbol of their horned heads. 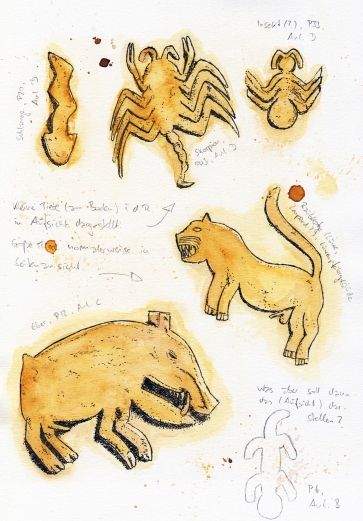 Visual notes: Göbekli Tepe’s animal depictions cover a wide range of different species. Interestingly they are shown as the early Neolithic hunters would have experienced them in their natural environment: larger mammals in side view, smaller like insects from above. 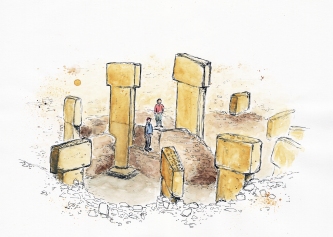 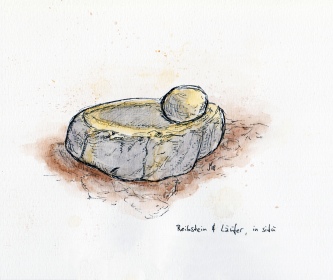 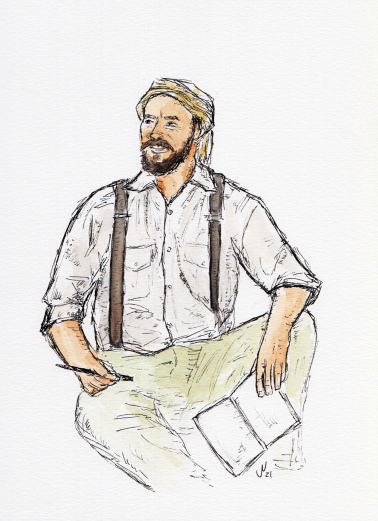 Self portrait of the archaeologist on site, mandatory sketchbook and pencil in hand.

Series of illustrations on the evolution of scientific publishing for an article about the “Archäologischer Anzeiger” and the new DAI lense viewer in “Archäologie Weltweit” resp. “Archaeology World-wide”  1/2020, a magazine of the German Archaeological Institute (DAI).

Illustrations for an online video clip for the German Archaeological Institute (DAI) social media channels, narrating the institute’s founding in 1829 in Rome.

(All rights reserved; no reproduction, modification or reprinting without written permission (if not stated elsewise) – please use the contact form for inquiries; commissions upon request.)